Cart is empty
Cart is empty
View cart
Checkout
English
$ ₽
(₽)
My Account
Sign inRegister
Home/Is there a mysterious portrait resemblance in the picture? The young gentleman is very similar to our president ...

Is there a mysterious portrait resemblance in the picture? The young gentleman is very similar to our president ... 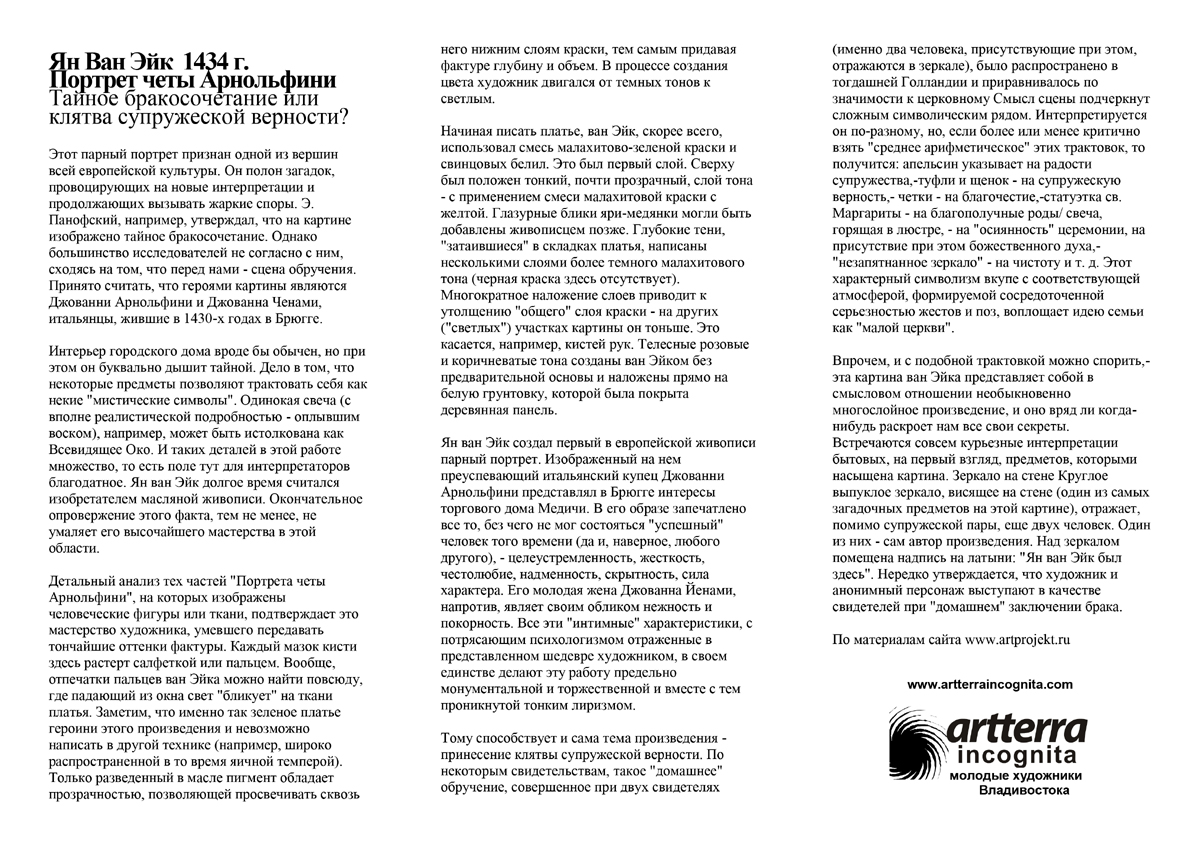 Riddles of an old picture?

Ian Van Eyck 1434Portrait of the Arnolfini coupleSecret marriage or vow of fidelity?This pair portrait is recognized as one of the peaks of all European culture. It is full of mysteries that provoke new interpretations and continue to cause heated debate. E. Panofsky, for example, argued that the painting depicts a secret marriage. However, most researchers disagree with him, agreeing that we are facing a betrothal scene. It is believed that the heroes of the picture are Giovanni Arnolfini and Giovanna Chenami, Italians who lived in Bruges in the 1430s.Interior of a city house it seems to be ordinary, but at the same time he literally breathes a secret. The fact is that some objects allow you to interpret yourself as some kind of "mystical symbols." A lonely candle (with a very realistic detail - a waxing wax), for example, can be construed as the All-Seeing Eye. And there are many such details in this work, that is, the field here is favorable for interpreters. Jan van Eyck has long been considered the inventor of oil painting. The final refutation of this fact, however, does not detract from his highest skill in this field.Detailed analysis those parts of the “Portrait of the Arnolfini couple” on which human figures or fabrics are depicted confirms this skill of the artist, who was able to convey the finest shades of texture. Each brush stroke is rubbed with a napkin or finger. In general, van Eyck's fingerprints can be found everywhere where the light incident from the window “glare” on the fabric of the dress. Note that this is the way the green dress of the heroine of this work cannot be written in any other technique (for example, egg tempera, widespread at that time). Only the pigment diluted in oil has transparency, which allows the lower layers of paint to be visible through it, thereby giving the texture depth and volume. In the process of creating color, the artist moved from dark tones to light.Starting to write a dress, van Eyck, most likely, used a mixture of malachite green paint and lead white. This was the first layer. A thin, almost transparent, layer of tone was laid on top - using a mixture of malachite paint with yellow. The glazed glare of the Yari-copperfish could be added by the painter later. The deep shadows, "hidden" in the folds of the dress, are written in several layers of a darker malachite tone (black paint is missing here). Multiple layering of the layers leads to a thickening of the "common" layer of paint - in other ("bright") sections of the picture it is thinner. This applies, for example, to the hands. The flesh-colored pink and brownish tones were created by van Eyck without a preliminary foundation and laid directly on the white primer on which the wood panel was coated.Ian van Eyck created the first in European painting, a paired portrait. The successful Italian merchant Giovanni Arnolfini portrayed in it represented the interests of the Medici trading house in Bruges. His image captures everything that a “successful” person of that time (and, probably, of any other) could not have taken place — purposefulness, rigidity, ambition, arrogance, secrecy, strength of character. His young wife, Giovanna Yenami, on the contrary, shows her appearance of tenderness and humility. All these "intimate" characteristics, with an amazing psychologism reflected in the artist’s masterpiece, make this work extremely monumental and solemn and at the same time imbued with subtle lyricism.The theme of the work also contributes to this. - the oath of marital fidelity. According to some accounts, such a “home” betrothal, committed with two witnesses (exactly the two people present at the same time, are reflected in the mirror), was widespread in the then Holland and was equal in importance to the church. The meaning of the scene is emphasized by a complex symbolic row. It is interpreted in different ways, but if we take the "arithmetic mean" of these interpretations more or less critically, it will turn out: an orange indicates the joys of matrimony, shoes and a puppy indicate marital fidelity, a rosary indicates piety, an figurine of St. Margaritas - for safe births / a candle burning in the chandelier - for the "luminosity" of the ceremony, for the presence of the divine spirit - the "spotless mirror" - for purity, etc.However, one can argue with a similar interpretation - this painting by van Eyck is semantically an unusually multi-layered work, and it is unlikely to ever reveal to us all its secrets. There are quite curious interpretations of everyday, at first glance, objects that are saturated with the picture. Mirror on the wall The round convex mirror hanging on the wall (one of the most mysterious objects in this picture) reflects, in addition to the couple, two more people. One of them is the author of the work. Above the mirror is an inscription in Latin: "Jan van Eyck was here." It is often claimed that the artist and the anonymous character act as witnesses in the “home” marriage.According to the materials of the site Artproekt

Is there a mysterious portrait resemblance in the picture?The young master is very similar to our president ...

Non-profit partnership of young artists of Vladivostok ARTTERRA INCOGNITA in February 2007 holds its first exhibition of paintings. Title - Birthday. Venue - Maternity Hospital No. 4 on the street. Aleutskoy, 38. The idea of the exhibition is not accidental - our partnership consists of more than half of young mothers. Motherhood and childhood are a topic close to us. We want to carry the beautiful with our paintings, especially for women who will soon be or have already become mothers.2007 the beginning of the issuance of the first birth certificates in Russia on maternity capital. And we found this inadvertent designation in the past. And for the exhibition, one of our artists Anna Kopytina wrote a copy from the work of the Dutch master Van Eyck "Portrait of the Arnolfini couple" (1434). Is not it, the young master is very similar to our president. Pay attention to the plot - and is it not the issue of the first birth certificate 600 years ago?We leave these mysteries to the mystics. And we believe in the magical power of art, in our country, and that beauty will save the world.Non-Profit PartnershipARTTERRA INCOGNITA

from the artist Anna Kopytina, Vladivostok