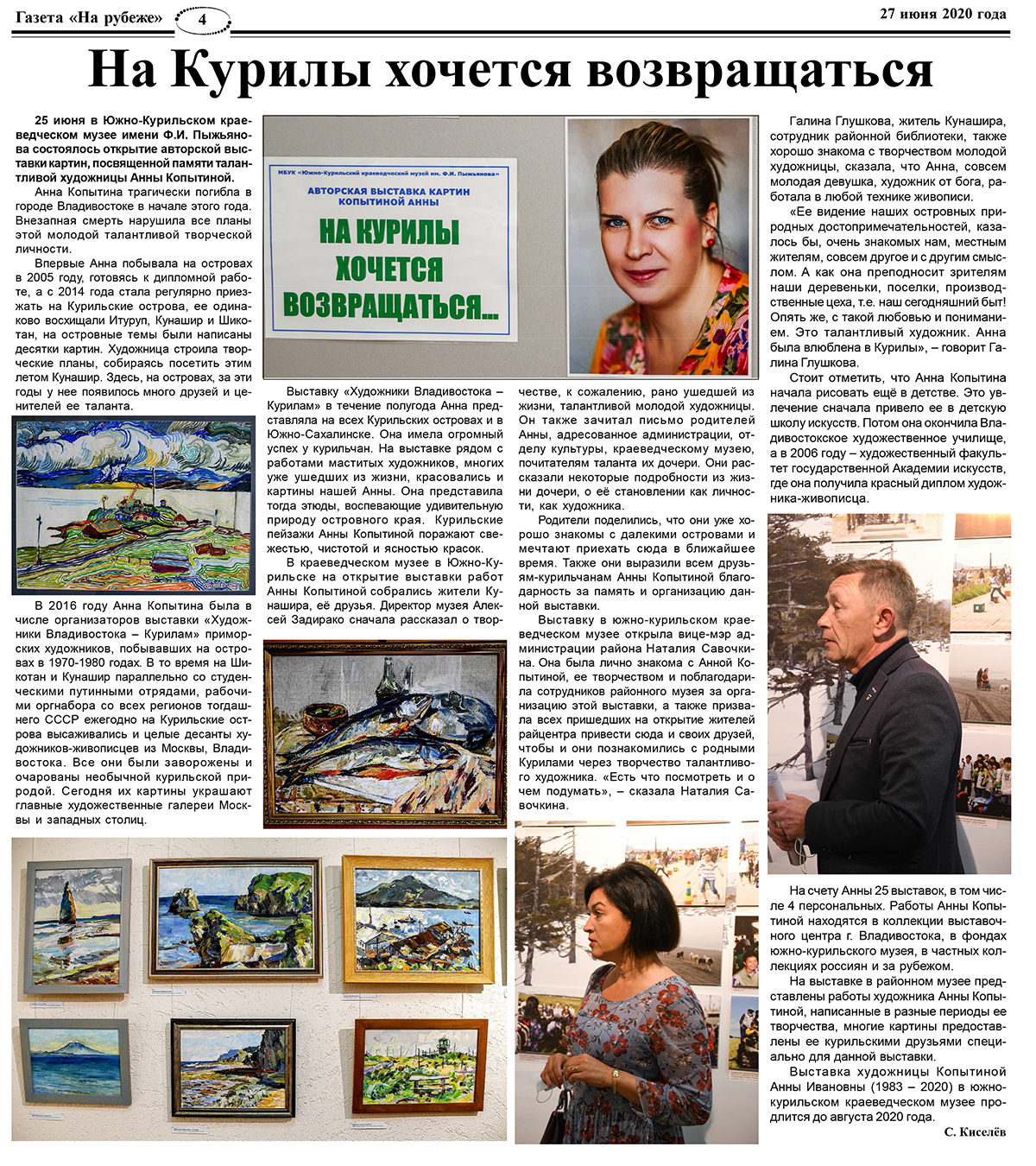 Let the author of the article forgive me for the comments.

I would like to clarify as the artist's mother.

Anna arrived in 2006 as part of a student Putin squad to a fish factory on Lake Tunaicha. This is evidenced by her 2006 paintings.

In 2008 I came to Yuzhno-Kurilsk on my own, in the plein air artist.

Alexander Gorodny provided assistance by contacting the artists of the "Shikotan Group".
Gorodny came up with the name of the exhibition and supplemented it with several paintings from the Art Etazh gallery exposition.

None of the artists wanted to go to the Kuriles (to Kunashir) - other plans, money is needed for travel and accommodation, etc.

Several artists helped to pack the paintings into boxes provided by the Union of Artists - Evgeny Bosak, Pavel Semyonushkin, Lena Gulyaeva (forgive me, who did not name).

39 artists of Vladivostok provided their paintings, including those who traveled to the Kuril Islands in 1970-1980 (Volkov, Korzh, Kuznetsov, Fomin ...).

Agreements were drawn up for all artists, the prices of the paintings were named - for example, paintings by Vladimir Rogachev (then already deceased) cost from 120 to 200 thousand rubles. And this is a great responsibility.

It turned out 2 healthy boxes with paintings about 200 kg each weighing, a loading company was hired, which made delivery from the building of the Union of Artists to the pier of the Fish Port, where the ship was docked.
Anna left a little later to meet the paintings in Yuzhno-Kurilsk.
All this Anya did for her own money, in her own time. The artists promised a percentage of the sales.

The head of the cultural department, by order of the governor, was able to find money to pay Anna's expenses for travel, accommodation, meals ...

But Anna had to return home, at home then her father was very ill.
Then all of us at home were under great stress, but fortunately, Anya's dad's complicated operation took place and was successful.
Then she had to go to the opening of the exhibition on Iturup, and Anya went, although the overstrain had a very strong effect on her health.
Anna opened an exhibition on Iturup, Kurilsk, and a week later returned home to go to the hospital for treatment.

And the exhibition was sent back, by the mayor's office managers - thank you, everything came safe and sound.

And in Vladivostok my mother met.

Photo reports and video about the exhibition "Artists of Vladivostok Kurilam" in 2016, see the pages:

Artists of Vladivostok Kurilam - article for the exhibition

Video report from the exhibition "Artists of Vladivostok Kurilam"

Reviews on the exhibition "Artists of Vladivostok Kurilam", photo report