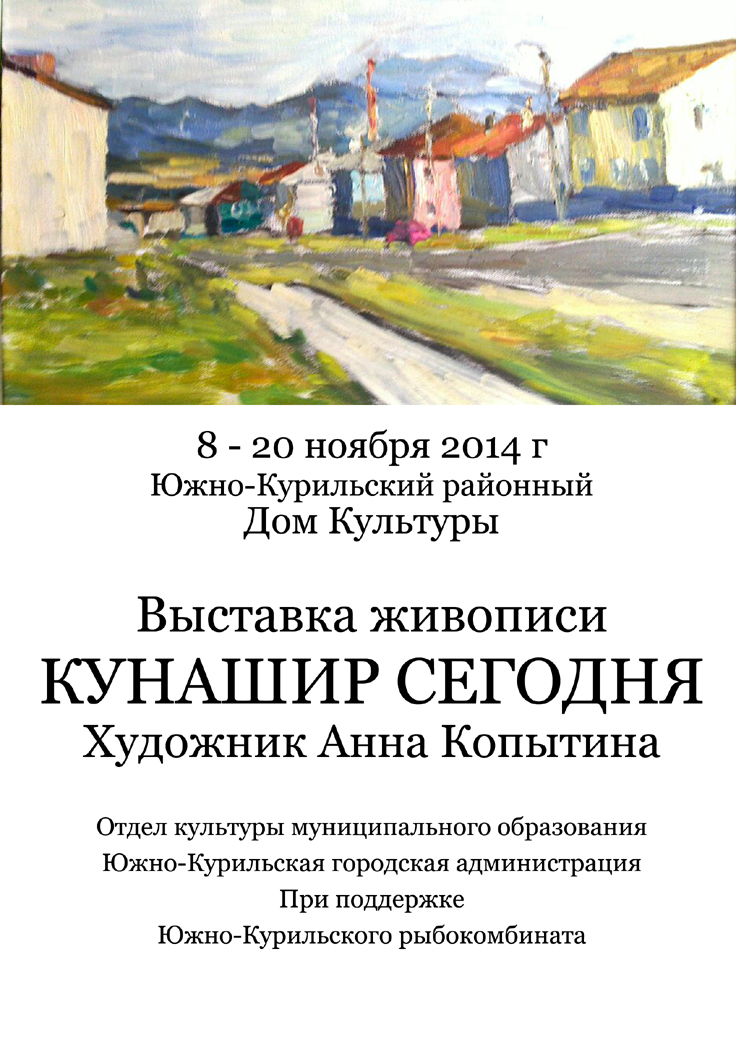 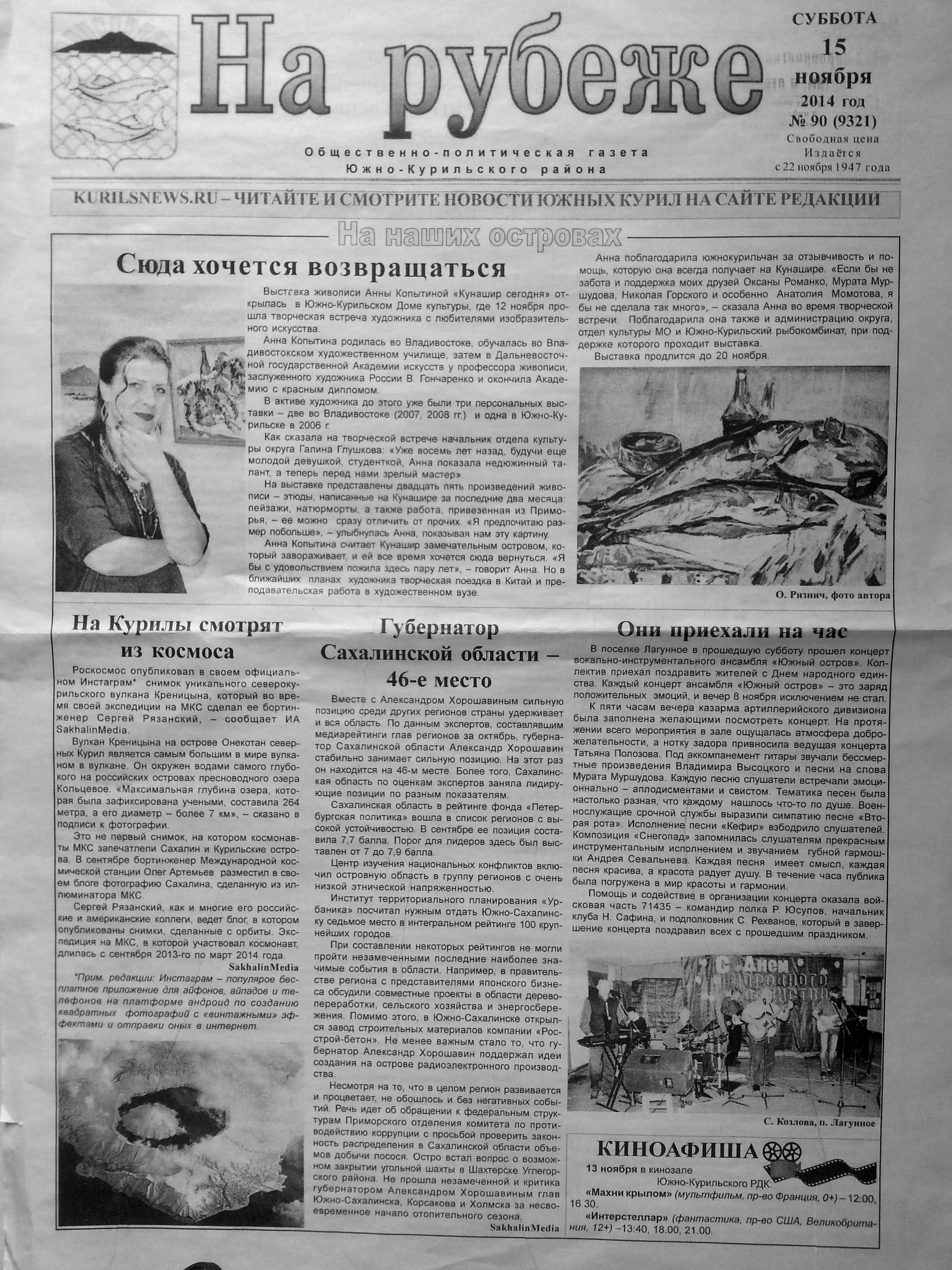 I want to come back here.

The exhibition of paintings by Anna Kopytina "Kunashir today" opened in the South Kuril House of Culture, where on November 12 a creative meeting of the artist with art lovers took place. 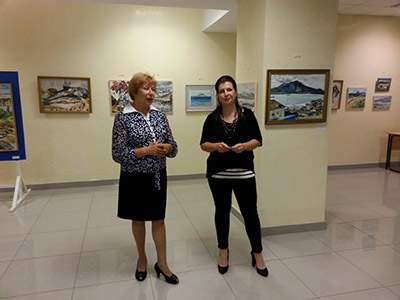 Anna Kopytina was born in Vladivostok, studied at the Vladivostok Art College, then at the Far Eastern State Academy of Arts with a professor of painting, Honored Artist of Russia V. Goncharenko and graduated from the Academy with honors.

Prior to that, the artist had already had three personal exhibitions - two in Vladivostok (2007, 2008) and one in Yuzhno-Kurilsk in 2006.

As the head of the district’s culture department Galina Glushkova said at the meeting, “Already eight years ago, as a young girl, a student, Anna showed remarkable talent, and now we have a mature master.”

The exhibition presents twenty-five paintings - sketches written in Kunashir over the past two months: landscapes, still lifes, as well as work brought from Primorye - it can immediately be distinguished from others. “I prefer a larger size,” Anna smiled, showing us this picture.

Anna Kopytina considers Kunashir a wonderful island that is fascinating, and she always wants to return here. “I would love to live here a couple of years,” says Anna. But the artist’s immediate plans include a creative trip to China and teaching at an art university. 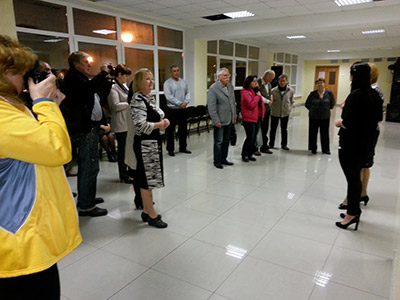 Anna thanked the South Kuril people for the responsiveness and help she receives in Kunashir. “If it were not for the care and support of my friends Oksana Romanko, Murat Murshudov, Nikolai Gorsky and especially Anatoly Momotov, I would not have done so much,” Anna said during a creative meeting. She also thanked the administration of the district, the culture department of the Moscow Region and the South Kuril fish factory, with the support of which the exhibition is being held.

The exhibition runs until November 20. 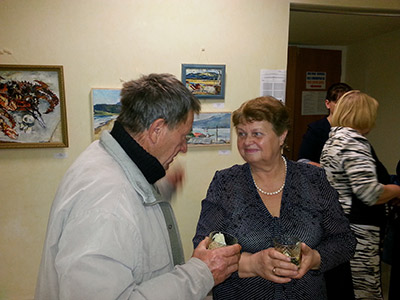 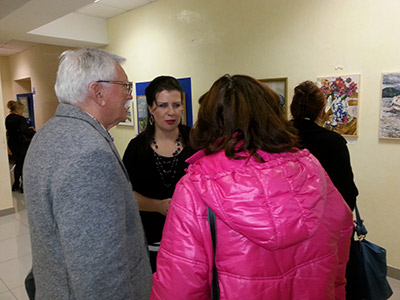 Note by the artist:

Unfortunately, in this, by and large, wonderful article, there are two inaccuracies. Namely:

1. The author does not have such an impressive number of personal exhibitions. In 2007, two major exhibitions were held, conceived and organized by the Non-Profit Partnership of Young Artists of Vladivostok, “ArtTerra Incognita”, which I directed at that time. The exhibition "Birthday" was held in the 4th hospital of Vladivostok, and the traveling exhibition "Wonderful Catch" visited a number of enterprises in the city's fishing industry. The works of many young artists of Vladivostok were exhibited, and organizational issues were largely resolved together.

from the artist Anna Kopytina, Vladivostok