Sketches in Kuril colors. Exhibition of works by Anna Kopytina in Yuzhno-Kurilsk in 2017

The exhibition of Anna Kopytina's artworks at the South Kuril House of Culture in 2017 was held from June 27 to July 22.

Anna Kopytina, an artist from Vladivostok, shared her plans to create a creative house for artists in Kunashir while working in the open air in the Kurilskiy reserve.

“On the Kuril Islands - the landscape itself asks for a canvas. There are many compositionally interesting places, you don't even need to travel far from Yuzhno-Kurilsk. Volcanoes are very interesting. Two of them are clearly visible from the village itself. Mendeleev volcano and Tyatya volcano, many residents daily admire from the windows of their apartments. Tyatya is more capricious, he sometimes hides behind a wall of fog, puts on cloudy "hats".

On a July weekend with the staff of the reserve, we were in the caldera of the Golovnin volcano, in the very south of Kunashir. In the caldera, a volcanic basin, there are two mineralized lakes. The color of water in streams and lakes is of various shades. Hazes of sulfurous gases rise from the fumarole fields ... Inside and on the slopes of the caldera, a forest of unusual Glen spruces grows, there is a lot of wild rosemary and dwarf cedar. 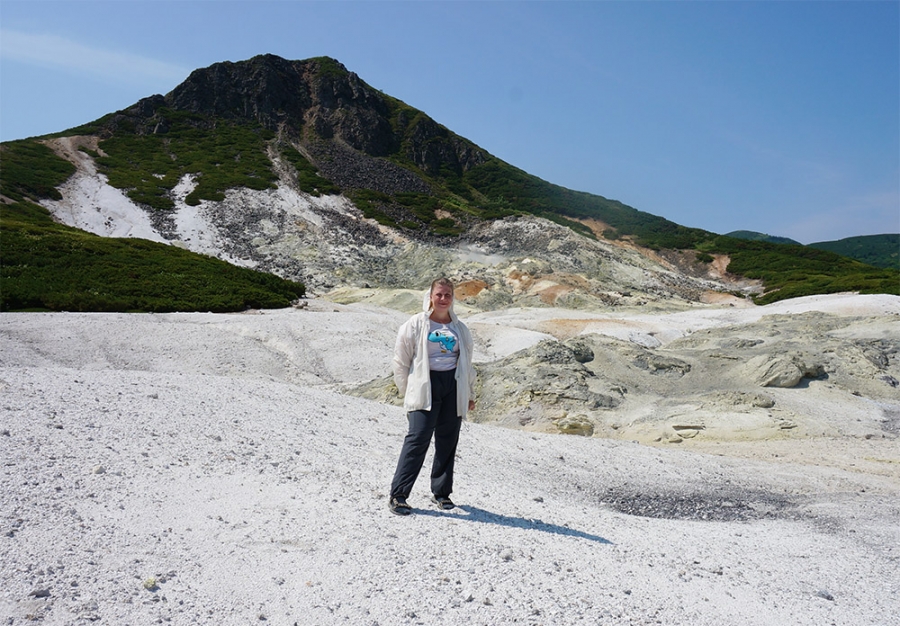 The plein air is important for the artist. The play of light and shadow, the ability to concentrate, quickly make sketches, sketches, correctly lay out color combinations - all this requires training and emotional calculation, and is necessary for the development of professional skills. Working in the field is exhausting in itself, it is not easy work. But nature returns and gives new strength, and then again you want to get out to extraordinary, beloved places.

The Kuril nature is extraordinary, it energizes, inspires and helps to unleash the creative potential of the individual. I would like more artists of different directions and styles to come to the Kuril Islands in order to draw inspiration from this beautiful land.

Once upon a time, many artists came to the Kuriles, and not only from Primorye, but also from other parts of Russia. I first came to the Kuril Islands in 2005. Since that time I have come several times, last year - with an exhibition of paintings "Artists of Vladivostok - Kurilam". Now on Kunashir my sixth creative trip with an exhibition and an open air. In the South Kuril region, cultural events such as exhibitions of paintings by artists, their lectures, master classes in fine arts are very rare. And very many residents, first of all, children love to draw, and it would be interesting for them to communicate with professional artists.

Back in the 90s of the last century, the founder of the South Kuril Regional Museum of Local Lore F.I. Pyzh'yanov and A.I. Gorodny (director of the Artetage gallery of contemporary art, Vladivostok) wanted to create a creative dacha in the Kuril Islands, but the unstable political situation in the country did not allow these plans to be implemented, and this idea remained to be implemented.

The idea is to have such a special place in the Kuril Islands where creative people could come. The place where they are expected. Such a creative house, where artists from all over Russia and from other countries of the world (primarily from nearby Japan) could stop for work, communication, exchange of experience, holding exhibitions and master classes for both children and adults, and not only in summer but also throughout the year. It seems to me that masters of various schools and genres could not only write their best works here, but also help local residents and tourists learn the technique of painting and other arts.

It is impossible to create such an education (“coworking” from the English co-working, “teamwork”) alone, you need to assemble a team of like-minded people. It will require the help of state structures - the administrations of the Sakhalin region and the South Kuril region. Many people in the area have already supported the idea of a creative dacha, and I really hope that it will come true.

I would also like to note that in the district House of Culture there is a circle of fine arts and arts and crafts. But there is no art school in the South Kuril region. And it is quite difficult for Kuril children to enroll in such specialties as a designer, architect, fashion designer, etc. Therefore, the issue of the art education of young Kuril residents is actually very important and should be resolved as soon as possible. "

An exhibition of art works by Anna Kopytina, a member of the Primorsky branch of the Union of Artists of Russia, a total of more than 50 sketches, was held from June 27 to July 22 at the Yuzhno-Kurilskiy District House of Culture. The author's works can be found on the website: www.artkopytina.com 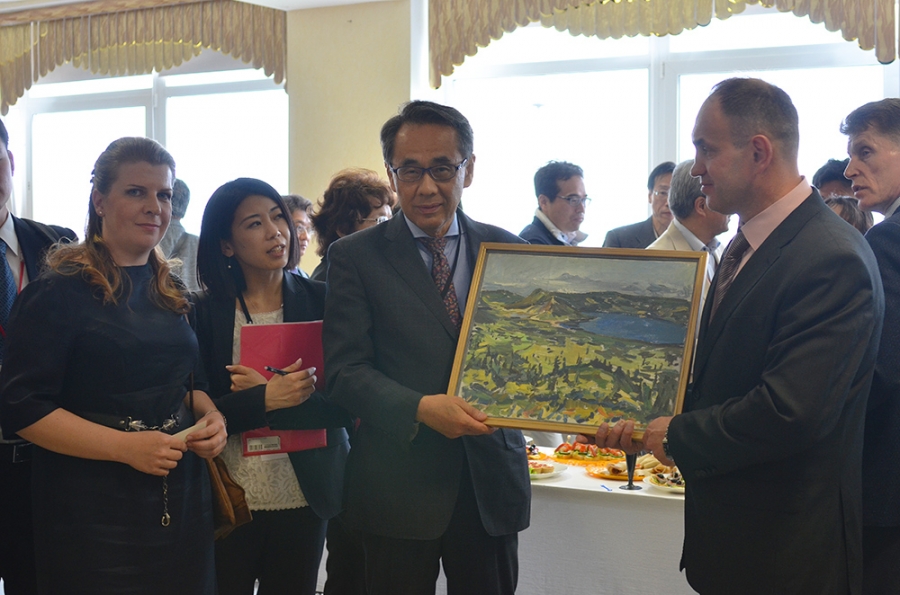 During the Japanese business mission to Kunashir, the head of the Japanese delegation, Eichi Hasegawa, was presented with a painting by Anna Kopytina "Caldera of Golovnin Volcano" by the administration of the South Kuril region. Photo by Dmitry Somov.

Based on materials from the publication South-Kuril Reserve - Sketches in Kuril colors. Caldera of the Golovnin volcano.